What Part of the Real Estate Cycle is Jacksonville, Florida In? 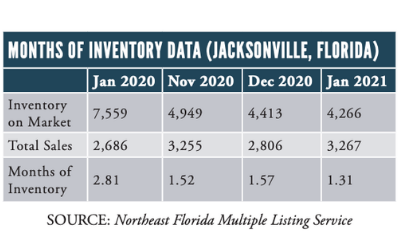 REAL ESTATE IS A DIFFERENT KIND OF CYCLE

In order to understand where we are in the cycle, we first need to think about what a real estate cycle is and how it differs from other markets like the stock market.

In the stock market, there are ups and downs. At times, the market loses and gains value at a much higher rate, and there is a lot of variability.

In real estate, it’s not really that way. Historically, you see that it’s rare for value to decrease. Even in four out of the last five recessions, real estate values across the country have actually gone up.

In terms of real estate cycles, we’re not really thinking about whether the market will lose or gain value, like the stock market, but whether we’re going to see lower- or higher-than-normal appreciation.

That’s one of the reasons why I love investing in rental properties – you don’t have those huge variations or swings as one sees in the stock market. Let’s look at median house pricing in the U.S. going back to 1963 (see graph below). We notice there are no huge ups and downs like you see in the stock market. You see the Great Recession from 2008-2011, but that was very unique. Generally speaking, we’re seeing periods of slower or faster periods of home price appreciation. So how do we know if we’re in a period of faster/slower home price appreciation? We use an important metric which measures supply and demand called MOI, months of inventory.

We’ve been tracking MOI at JWB since 2014 and it has consistently been between three and five months of inventory, which is incredibly low.

This is mainly due to the huge decrease in home building that took places in the 2010s. So there was low supply and prices have gone up since then. We’ve seen higher than normal home price appreciation since the Great Recession due to a lack of supply.

I’ve been pulling MOI numbers and have never seen it this low. As of late December, we’re at 1.3 months of inventory in Jacksonville. Back to the original question — what part of the real estate cycle are we in? 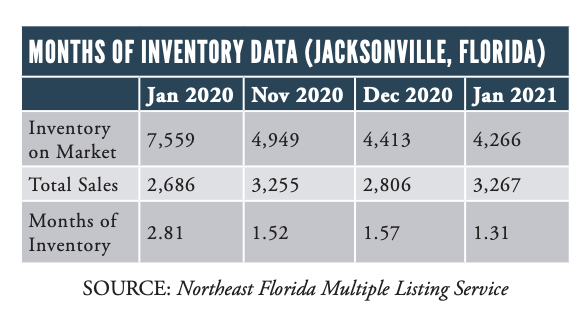 We are entering a period of continued higher than normal home price appreciation.

Many might be surprised that I’m sharing this opinion because of the pandemic and the resulting economic damage. In reality, when the pandemic hit, it really accelerated what was already happening. We already had a short supply and the interest rates were decreasing, which increased demand. The net migration to the state of Florida, specifically Jacksonville, is another contributor to high demand. So, we’re seeing limited supply, increased demand, and rising prices due to limited inventory.