New Homes Get Built With Renters in Mind 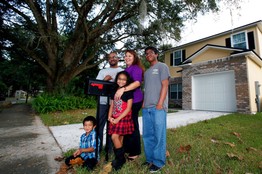 Vanessa Finch and her family in front of their newly built rental house in Jacksonville, Fla. Daron Dean for The Wall Street Journal

More single-family homes across the nation are being built for renters, a shift that mirrors a steady decline in homeownership in the years since the housing bust.

Until recently, real-estate investors had focused primarily on scooping up tens of thousands of foreclosed homes, at a sharp discount, and converting them into rental properties. Now that the pool of these properties has declined and prices have risen, these investors are snapping up newly finished single-family homes to be used as rentals, or even developing vacant lots from the ground up.

Last year 5.8% of the 535,000 single-family homes started were being built as rentals, up from 4.8% in 2011 and the highest share since at least 1974, according to an analysis of census data by the National Association of Homebuilders. From 1974 to the home-price peak in 2006, only about 2% of single-family homes were built for rentals.

Vanessa Finch sees her new rental as a waypoint. Ms. Finch, a 37-year-old human-resources manager, recently moved into a newly built rental home in Jacksonville, Fla. Ms. Finch and her husband, who have four children, wanted to get to know the area before they buy. Their two-story, four-bedroom rental costs $1,400 a month, but unlike most rentals, it has new paint and fresh landscaping.

“A lot of the neighbors came by because they were interested,” she says. “They were really surprised that there were brand-spanking new houses for rent. They had never heard of such a thing.”

For investors, the interest in new homes reflects their belief that the rental market will continue to see strong demand and rising rents. While there is little data for the level of single-family home rents, apartment rents have shot up 11.3% since 2009, according to Reis Inc. REIS 0.00% Overall, about 15 million of the nation’s single-family homes were rentals last year, up from 10.8 million in 2005, according to Zelman & Associates, a research firm.

Meanwhile, foreclosures and other distressed sales accounted for less than 15% of all home sales in September, down from 21% a year earlier and 33% at the peak of the housing bust in early 2009, according to CoreLogic, CLGX -0.68% a data firm.

The new homes-turned-rentals can be found both in new subdivisions or built on lots in long-standing communities.

Colony Capital LLC’s Colony American Homes unit has about 1,000 newly built homes out of a total portfolio of 15,000 rentals. The company purchases them from home builders and is able to customize the building along the way.

“We can say we want a three-bedroom home with 2,000 square feet with these kinds of finishings and they’re in these communities where most of the families have lived there for a while,” says Justin Chang, chief executive of Colony American Homes. “It’s not like a whole subdivision of rental homes; the builder sells us 30 or 50 homes from the last build out.”

For builders like Marc Jungers, institutional buyers offer a way to move homes in a hurry and keep cash coming in the door. He recently sold about 30 newly finished homes to Landsmith LP, a San Francisco real-estate investment firm that plans to rent them out to tenants. Mr. Jungers says the newly built rental homes, because they are sold in bulk, are discounted between 8% and 10% of what an owner-occupant buyer would pay. “It gives us certainty of closing and helps us backfill a community,” he says.

Building new rental homes undercuts part of the thesis of investing in single-family rental homes. Investors were attracted to this market largely because they could buy houses for less than the “replacement cost” or how much it would cost to build a new home.

But investors say they can still make profits. They point out that new homes typically come with builder warranties and cost less to maintain, at least in the initial years of ownership.

Also, the cost of building a new home is relatively low these days if lots were purchased on the cheap. Take the case of Alex Sifakis, a 30-year-old entrepreneur who began his real-estate career in 2006 when he graduated from college and started buying and flipping properties.

Mr. Sifakis started buying empty lots at a discount during the downturn, and in the meantime he got a contractor’s license so he could expand into development and build rental housing from the ground up. Mr. Sifakis’s Jacksonville-based company, JWB Real Estate Capital, built 68 new rental homes last year, he says, and is on track to start somewhere between 70 and 90 new rentals this year.

The homes are spread throughout the Jacksonville area, mostly as developments in older neighborhoods and subdivisions. JWB can rent them and still make money partly because land typically accounts for about 40% of the cost of building a home.

Landsmith bought about 1,800 existing single-family homes over the past two years but has recently turned to buying new homes. The company has developed or bought about 600 new single-family rentals in Houston, Indianapolis and Charlotte, N.C.

“So you could buy a house from 1990 and get a 12% return. Now you can buy a brand-new house and get a 10% net return, so the spread isn’t that dramatic given the uptick in quality you’re getting,” says Chang Kim, a vice president at Landsmith. “We’re in a unique period where brand-new houses can be built for a low enough cost that single family rentals can work.”

This Mistake Costs Investors Hundreds of Thousands of Dollars

END_OF_DOCUMENT_TOKEN_TO_BE_REPLACED

How to Apply Life Lessons to Business

END_OF_DOCUMENT_TOKEN_TO_BE_REPLACED

Any cookies that may not be particularly necessary for the website to function and is used specifically to collect user personal data via analytics, ads, other embedded contents are termed as non-necessary cookies. It is mandatory to procure user consent prior to running these cookies on your website.