We all know that the real estate market is rapidly changing. It is hard to imagine that just over two years ago we were in the depths of, “the worst housing market in the last 80 years,” (which, for buy and hold real estate investors, meant the best real estate market in the last 80 years). It is an understatement to say that things have changed since then! The market has been steadily picking up steam the last few years, but, how much and how fast is it picking it up?

As always, this information constitutes JWB’s opinion and is provided for educational purposes only. JWB carefully researches the information we provide our investors; however, we do not assume any liability for any errors contained herein. Before making any investment decisions, you should do your own research and consult a qualified professional. 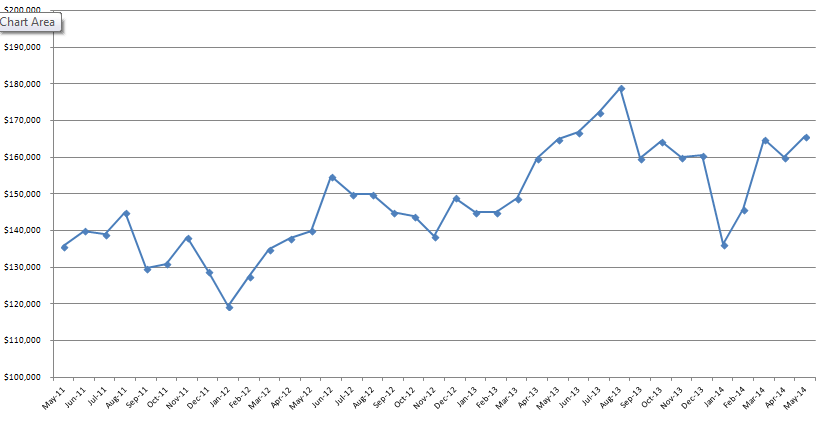 Everybody knows that supply and demand drive prices. In the real estate market, the balance between supply and demand is described by the “Months of Inventory” (MOI) on the market. The premise behind MOI is pretty simple. If no new homes for sale were added to the market, and house sales continued at their current pace, how many months would go by before the current supply of houses on the market was exhausted? An equilibrium market is defined as 6-8 MOI. An MOI above 8 months means there is an oversupply of houses – and prices will probably go down. An MOI below 6 months means there is an undersupply of houses – and prices will probably go up. The best part about MOI is that it is a forward looking indicator – it predicts what will happen with future price changes. To give you a historical reference point, the highest MOI during the downturn was in January 2008. During this time, there were 15,325 homes on the market and only 692 properties sold that month, which indicated an MOI of 22.1 (15,325/692 = 22.1). Prices were already falling by that point, however, inventory started creeping up in early 2006 before there were any decreases in home prices (the high point for home prices in NEFL was June 2006 with a median home price of $223,000). So, what does the current data say? As of June 12, 2014, there were 8,872 houses on the market in Northeast Florida. In May 2014, 1,872 houses sold. That is a MOI of 4.7 which indicates a large undersupply of houses, and should predict future price increases. As of a year ago, there was a 4.27 month supply, so inventory has slowly crept up since then – but not that much.

In the article from May of last year, we showed that prices had gone up drastically since January of 2012 (the bottom), but what has happened since then? Did the lower inventory in May 2013 predict future price increases? The most commonly used metric to describe home prices in a region is median home price (because the average home price can be swayed by large outliers much more easily than the median). One thing to remember about home prices is that they fluctuate seasonally. Even in an equilibrium market, prices will go down in the winter months and up in the summer months (this of course is due to supply and demand, and more people want to buy houses in the summer). See the chart below for home prices in Northeast Florida over the past three years. As you can see, from the May 2013 article, the median home price was $159,900. The median home price has increased slightly since then. As of May 2013, the median home price was $165,685 – a 3.6% increase. Now, 3.6% is an increase, but not a large increase – it is about the average in Jacksonville from 1981-2001 (pre-boom years). If inventory was so low (4.27 months as of May 2013), why didn’t prices rise faster?

Effect of REOs on the Market

The answer lies in the increase in REOs from last year to this year. REO stands for Real Estate Owned- it is a property that is owned by the lender, after the lender has foreclosed on it. REOs normally sell at large discounts to their market value – that is why they are so attractive to investors. The current median price of an REO is $80,300, which is less than 50% the overall median home price! Because of that, when more REOs hit the market, they lower the median home price – sometimes substantially. They do this in two ways: 1) the actual sale of the REO gets counted in the median home price calculation, and 2) by giving buyers the choice of buying the REO at a lower price, the REOs depress the price of non-REO homes. However, when the REOs dry up, both of these effects disappear very quickly. That phenomenon was responsible for the median home price rise from $119,000 in January 2012 to $160,000 in April 2013. In April 2013, 418 REOs sold. In May of 2014, 560 REOs sold which is a 34% increase.

Since REOs are priced so much lower than non-REOs, this increase in REOs has had a substantial impact on the median home price. The next logical question – if the market is improving, why is the number of REOs up? How long will this continue, and what does it mean for future home prices? There are a couple different things contributing to the current rising number of REOs, despite the improvement in the real estate market. The first is since Florida is a judicial foreclosure state, it takes a very long time to foreclose on a property. According to Real Estate Economy Watch, the average length of time for a lender to foreclose is 893 days in Florida, which is the second longest in the country. That means that if a lender would start a foreclosure today, it would be 2.5 years before they would actually get the property back as an REO. Traditionally, foreclosures could be done in Florida in six to nine months, but because of the extreme volume of foreclosures, coupled with the robo-signing scandal from a couple of years ago (where lenders were illegally signing documents hoping to speed up foreclosures), both the courts and the lenders are very wary of making any mistakes in the process, so they are taking their time.

So how long will this continue, and what will its effect be on home prices? Due to many of the REOs being owned by private companies and equity firms purchasing the non-performing notes from traditional lenders, no one really knows. All in all, most estimates range from one to three years. Despite the trickling of these REOs into the market over the next few years, high demand for properties from both investors and homeowners (especially as credit requirements continue to loosen) is expected to keep inventory low, and therefore prices on the rise.

Alex Sifakis is the President of JWB Real Estate Capital. JWB serves clients in 10 countries and 32 states who have invested in over 1,000 investment properties since 2006. In 2012, JWB was recognized as the #12 Fastest Growing Real Estate Company in the US by Inc. Magazine. To learn more about our team and our investments, please call (904) 677-6777.